The North Island Hospitals Project (NIHP) has been recognized by the Canadian Council for Public-Private Partnerships (CCPPP) for innovation and excellence in public-private partnerships.  The project received the Silver Award for Infrastructure Sustainability at a ceremony November 3rd in Toronto. 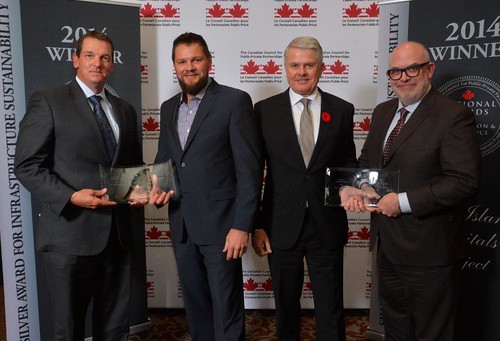 “Island Health is extremely pleased to accept the inaugural Silver Award for Infrastructure Sustainability from the Canadian Council for Public-Private Partnerships,” said NIHP Chief Project Officer Tom Sparrow. “We believe designing, building, maintaining and partially financing the two new state-of-the-art hospitals in the Comox Valley and Campbell River is the best approach to meeting the health care needs of all residents of the mid and north Vancouver Island regions.”

The $606.2 million North Island Hospitals Project includes a new $331.7 million, 153-bed Comox Valley Hospital in Courtenay on Lerwick Road near Ryan Road, and a new $274.5 million, 95-bed Campbell River Hospital on the existing hospital site at 375 – 2nd Avenue. Both hospitals are scheduled for completion by late 2017.

“Island Health very much appreciates the continued support and guidance from the Province of British Columbia, Ministry of Finance and Ministry of Health; and Partnerships BC,” said Island Health Board Chair Don Hubbard. “Their assistance truly ensured accountability to all of our stakeholders.”

Tandem Health Partners, the consortium selected to design, build, partially finance and maintain the North Island Hospitals Project, was happy to receive the award for their work on the project.

“We are very pleased that the North Island Hospitals Project has been honoured by the Canadian Council for Public-Private Partnerships,” said Rick Taylor, president of Infrastructure Investments for Balfour Beatty Investments North America. “The Tandem Health Partners team developed a truly innovative approach to this project and we look forward to delivering a successful result for the people of Vancouver Island.”

Mark Romoff, President and CEO of CCPPP, said the Council’s Awards Program has become increasingly competitive, which speaks highly about the calibre of the projects selected.

“This year’s award winner will be bringing cutting-edge health care facilities that are focused on the patients,” he said. “These projects are delivered to the highest quality standards, while providing substantial savings and efficiencies over traditional procurement methods.”