HomeNewsHospitals project on time, on budget, on scope

Hospitals project on time, on budget, on scope

The construction of the new hospitals in the Comox Valley and Campbell River is forging ahead, on time, on budget and on scope, says Chief Project Officer Tom Sparrow. 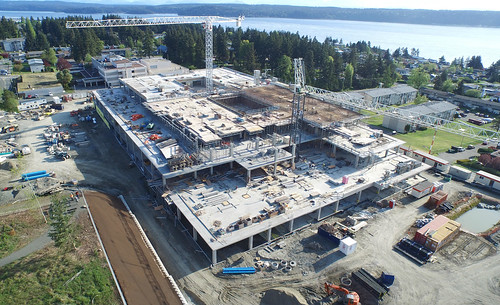 “It’s exciting to see that hundreds of workers are currently on the sites, more than half of them local and roughly three quarters from Vancouver Island.”

The North Island Hospitals Project is also providing many training opportunities. There were 81 apprentices working for the hospitals project in April, including plumbing, carpentry, iron workers and electrical.

“The project team and Tandem have been working with the Provincial Government, School Districts, North Island College, the North Vancouver Island Aboriginal Training Society, employment foundations, trade associations and others to develop apprenticeship and other training programs and employment opportunities to maximize economic and training opportunities,” Sparrow said. 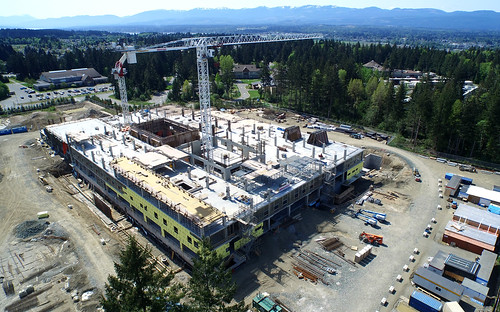 The Comox Valley hospital site on May 3, 2015 as seen from the northeast corner, with the Comox Valley Aquatic Centre upper left, North Island College upper right, with Courtenay, Comox and the Beaufort Range stretching into the distance.

The $606.2 million North Island Hospitals Project includes a new $331.7 million, 153-bed Comox Valley Hospital in Courtenay on Lerwick Road near Ryan Road, and a new $274.5 million, 95-bed Campbell River Hospital on the existing hospital site at 375 – 2nd Avenue. Both hospitals are scheduled for completion by late 2017.

“These facilities will be state-of-the-art healthcare centres that will benefit so many in the years to come,” said Robin Latondresse, Tandem Health Partners Senior Project Manager. “Tandem is proud and committed to working with Island Health and the North Island communities to deliver these important projects.”