HomeNewsA Gathering Place for everybody

A Gathering Place for everybody

New hospitals in the Comox Valley and Campbell River will have all-inclusive places for quiet reflection and ceremony when the hospitals open in late 2017.
Island Health recognizes the importance of ensuring that everyone – including First Nations – and other Aboriginal people — feel welcome and respected when they receive health care services.
While many Island Health facilities feature some form of all-nations room, the North Island Hospitals Project is offering new opportunities for these special places; the opportunity to improve on earlier designs and the opportunity to develop more comprehensive guidelines around use of the rooms. 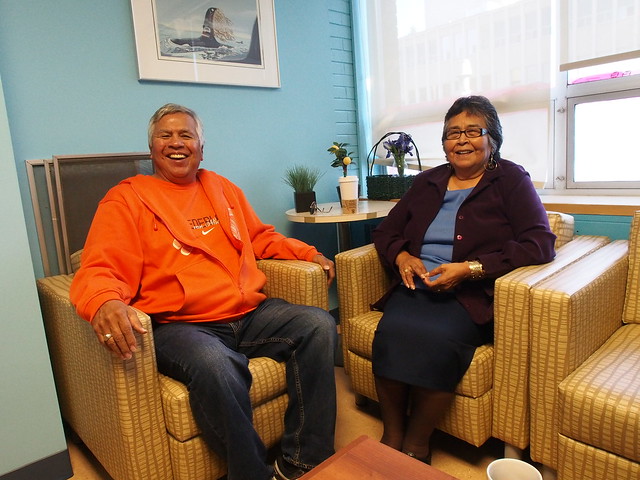 The North Island Hospitals Project created an Aboriginal Working Group in 2012 to help design hospitals that reflect Vancouver Island First Nations and Métis cultures, community history and values, and incorporate the work of local artists.
Both new hospitals will feature a special room or “Gathering Place ” located next to the hospitals’ main entrances, providing a culturally safe, spiritual and non-denominational place for people of all nations. Aboriginal Working Group member James Quatell wants people to know that while the Gathering Place designs recognize the mid and North Island’s rich Aboriginal cultures, the rooms are for use by people of all cultures.
The Wei Wai Kum Nation Elder fears the public and hospital staff will assume the rooms are only for use by Aboriginal people. It’s not called the First Nations Room, he says, but the Gathering Place.
“Who’s that for? Everybody,” he says. “That’s what’s got to get out there. It’s for everybody, Vietnamese, Hindu, whatever. It’s not the Aboriginal Healing Room, but a room to gather. It’s just a gathering room.”
Quatell joined the NIHP Aboriginal Working Group after seeing the welcoming ceremony for the new Campbell River District Hospital in 2013, prior to construction.
“I realized that all these things have started happening here in our community. I talked to Jeff (Beselt, then-medical chief of staff, now Executive Medical Director of Island Health’s Geographic Area 1) and he said ‘we want you on this working group,’” he laughs. “I had no idea that I wanted to be a part of this working group.”
Dr. Evelyn Voyageur, a nurse/instructor and member of the Tsawataineuk First Nation of Kingcome Inlet, came to the Aboriginal Working Group through a different path. She’s a North Island College instructor and also sits on the board of St. Joseph’s General Hospital.
“I attended some (of the early Aboriginal Working Group) meetings and I was very vocal,” she smiles. “If things are not the way they should be, I will say it.
“I’m sure it was Roger (Kishi, a Village of Cumberland Councillor who sits on the Aboriginal Working Group, the St. Joe’s board and the Comox Strathcona Regional Hospital District board) who was there and said ‘Evelyn, we need you on the new hospital group. Come to the meeting.’ That’s how I started.”
Thanks to input from Aboriginal Working Group members, the Gathering Place designs include a larger exterior view to maximize natural lighting, as well as direct access to an outdoor garden area with traditional medicinal plants. The rooms have flexible spaces and systems to accommodate a wide variety of ceremonies for any cultures. For example, the Gathering Places have additional sound proofing and an independent ventilation system to accommodate music, drumming and smudging ceremonies. The rooms will have separate entrances for patients and public. They’ll feature lots of cedar, fireplaces, and colour schemes consistent with those of North Island First Nations. In another improvement on earlier designs and existing All Nations rooms in other facilities, North Island Hospitals Project Gathering Places will have additional space for the secure storage of ceremonial items.
Both Quatell and Voyageur say the inclusion of Aboriginal cultures and values in the hospital designs is good news, but both are also eager to see how the Gathering Places will be used once the hospitals are built. They feel the room at the existing Campbell River Hospital has been under used and misunderstood. Too often the room sits empty, perhaps because hospital visitors, patients and staff feel it is only for Aboriginal people to use. Quatell says that’s got to change. There’s no turning back.
“If there’s going to be any change, you have to act on it,” he says. “We have to act on it. I will act on it. Island Health was willing to bring us into the Working Group that allowed this to take place. Island Health opened (the door), I’ve come through and there’s a lot of other people that have come through.”
“I didn’t even know where it was,” Voyageur said about the existing room in the Campbell River Hospital. “I had no idea.”
She’s hopeful that the design process for the new hospitals and the Gathering Places will translate into more cultural awareness and flexibility when it comes to developing guidelines for how the rooms are used.
“The optimism that I’ve got is that we’ve been included,” she said. “We’ve been involved in the planning of it. Whether it’s going to carry out when it’s actually in place, is another thing. It’s all well to have a really nice place and we’re going to say it’s the ‘Gathering Place’ but what I’m concerned about is the people who are going to run it. Are they going to be saying ‘no, you can’t do that. That’s not within the policy’? That’s what I’m concerned about.”
Indeed, guidelines for use of the new Gathering Places have not yet been determined, but Island Health will continue to work with the Aboriginal Working Group, clinicians and others to develop guidelines consistent with the all-inclusive spirit of these special spaces.