North Island Hospitals Project sites in Campbell River and the Comox Valley are providing “invaluable” educational and employment opportunities to people looking to get into the construction industry. That was the word from North Island College (NIC) Carpentry Instructor Tom Klatt, after he and his Foundation Carpentry Program students toured the new Comox Valley Hospital construction site.

“It’s invaluable,” he said. “They can see what they’re learning in school being applied every day on a job of this size. The tour shows them a little bit about what’s going on in the trade and in other trades – how people work side by side.
“They see carpenters at work doing stuff that they’re learning to do now, so it gives them hope for the future and shows them that there’s something in their neck of the woods that they can access and possibly get a job and get some experience.”

The NIHP has been providing jobs and experience in volume. Employment numbers peaked in April with a total of 1,008 people working on the two hospital construction sites, including 290 apprentices.

“This is the second time we’ve been on a site tour and out of the first tour two people landed work here and they’ve been working since last September,” Klatt said. “(The college trades centre is) a block and a half away from this site and every day the guys that come to school see people going to work, see what it takes to stay on a job. It’s been good.”

Klatt and students toured the site with Nazz Russo, Graham’s Comox Valley Hospital Site Superintendent.
“I love getting as many people into this industry as I can,” Russo said. “It’s an industry that needs people. It’s hard to find people.”
Russo agreed it’s been very handy to have students training so close to the construction site.
“I wish all the best to all of them, and that this is a career that they decide to stay with,” he said.

Graham’s Health, Safety & Environment (HSE) Supervisor Michael Brown made the students’ tour possible by first providing them with a site safety orientation. More than 2,000 safety orientations have been conducted since the North Island Hospitals Project began.
Brown said it’s important to establish safety as the top priority on site from the beginning.

“A strong start is having the right training and mentorship from the first day when it comes to safety, whether that means starting an apprenticeship program at NIC or the first day on the project,” he said. “The students benefit from having Klatt as a strong mentor at the school.
“All of our site-based workers spend half of their first day onsite completing a thorough site-specific orientation followed by a review of any applicable Safe Operating Procedures for their specific tasks. This is then followed up with a site tour of their work areas, emergency locations and potential hazards.”

In addition, new workers are initially paired up with a more experienced worker or journey person until deemed competent to work safely by their supervisor. 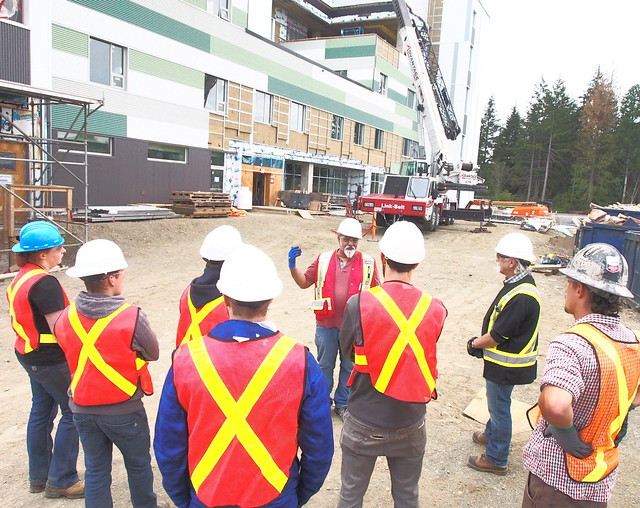