The North Island Hospitals Project reached an important milestone earlier this summer with the first-time energizing of the main electrical rooms in the new Comox Valley and Campbell River hospitals.

‘Going hot’ – the term used by the electricians – might make the process sound simple, but setting the stage to distribute electricity through a vast network of cables in each of the hospitals required much more than just flipping a switch. It required months of planning and preparation work, as well as dedication to teamwork and a devotion to safety.

NIHP electrical contractors Houle Electric (at the Comox Valley Hospital) and Keldon Electric (at the Campbell River District Hospital) worked in concert with BC Hydro planners and crews to connect the new hospitals to the electrical grid. This involved running two underground 25,000-volt lines on separate circuits – a primary and an emergency back-up line – into each of the new hospitals. The two lines come together at a special ‘vista’ switch, which automatically activates the back-up circuit if primary power is interrupted. The switches are located in special underground vaults.

“When you’re installing a vista, it’s a fairly complex job compared to normal industrial applications,” said Scott McLean, BC Hydro’s manager of field crews for both hospital construction sites. “We had to do confined space entry, a more complicated entry of the vaults in order to put a man in there and not to be exposed to any toxic gases or low oxygen or anything like that. That made it a little more complicated.

“We were really trying to meet the in-service dates requested by the hospitals, so we brought in crews from other districts to help out our crews. We had one new power line technician (PLT) from the Lower Mainland who specialized in underground vista switch installations, so he led both projects. We had our Occupational Health and Safety specialist come up. They had to be on site for the confined space entry, to make sure everything was covered off.”

Matthew Bewsey, Houle Electric’s Comox Valley Hospital site superintendent, described a two-stage process when it came to energizing the main electrical room for the first time.
“First we went to the BC Hydro entrance room to rack in (activate) a high voltage breaker,” he said. “Once we’d racked in that breaker, we’d basically joined the city grid to the building. From there, we went into the main electrical room and energized the 25,000-volt breaker. That then energized the three 1,000,000-volt transformers, stepping 25,000 volts down to 600 volts.”

Energizing the main electrical rooms set the stage to spread power throughout the hospitals via a 600-volt distribution network. That voltage can be further stepped down to levels required by specific hospital equipment, as well as the standard 120-volt level.

Bewsey said it’s very important that the hospitals’ electrical infrastructure be of the highest quality.
“It went well, very well,” he said after the main electrical room was energized in the Comox Valley Hospital. “Those transformers are sounding very nice and quiet. That’s an extremely good product. I’ve never heard transformers so quiet.”

The Comox Valley Hospital energizing procedure took place only after Bewsey’s five-person team developed and worked through a plan to lock out switches and equipment to prevent any accidental energizing of circuits. For an extra level of safety, they then locked up the keys to the locks in a separate lock box.

“First and foremost is that everyone gets home to their families safely,” he said. “So safety is our number one priority. Together we come up with a written plan and then we walk through all our lock-outs. Then, even though we agree and we’re on the same plan, we put any key in the box. Then each one of us locks out individually so we can’t get a key for any lock without all five of us meeting up again and taking off the locks together as a team.”

Energizing the new Campbell River District Hospital was a slightly different procedure, where the primary and secondary circuits were successfully energized on separate dates. 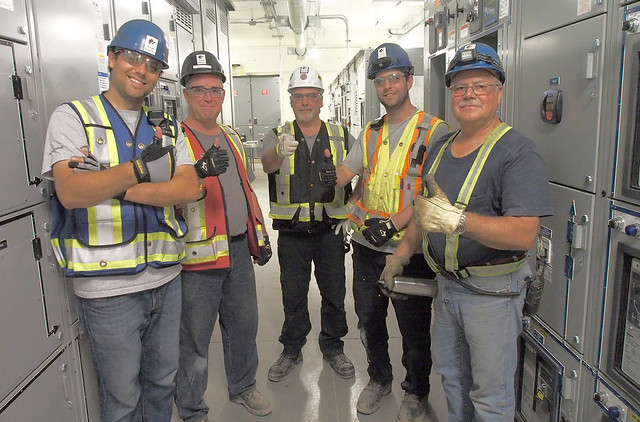